The cover of this novel combines two of my favourite things…can you guess what they are?

I’m excited to feature Juanita Kees’ new romantic suspense novel, Under Cover of Dark. Juanita is a talented romance author and a skilled editor, who I’ve worked with on one of my projects. She shares my love of romantic suspense and if the blurb is anything to go by, we’ll get a double dose of romance and suspense in her new novel. Take a look:

Under Cover of Dark

New Australian romantic suspense follows Under the Hood, about a Western Australian drug gang, the teenagers they recruit, and the cop who wants to bring them down.

When Mark Johnson delves deeper into his investigation into the murder of Tiny Watts, and the involvement of a teenage gang with sleazy lawyer Gino Bennetti and his drug world ties, the last thing he expects is to be interviewing Gino’s widow, a woman in a world of trouble.

When her husband is shot and killed, it is both a relief and a disaster. Lily has her son to protect and secrets that run deeper than the scars she bears. Mark Johnson is the last person she wants uncovering those secrets, especially the truth about her son Luke’s involvement in Tiny Watts’s murder.

As the investigation continues and Lily’s wounds begin to heal, she finds the detective easy to trust and the friendship between them blossoms into more. But the secret Lily holds places everyone in very real danger. When it is finally revealed, Lily will lose everything: her son, the man she’s grown to love, her freedom and her life.

Buy Under Cover of Dark now on Amazon!

You can also check out Juanita’s other fabulous titles on Amazon: 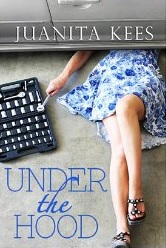 5 Replies to “Release day: Under Cover of Dark”