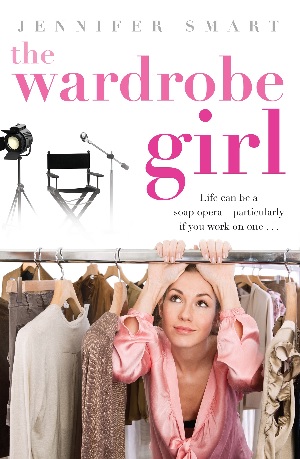 ‘It’s just string bikinis, thongs and boardies on Pretty Beach Rescue. You could do it drunk and standing on your head.’

After the humiliating end of her last relationship, this is just what TV costume designer, Tess Appleby, needs to hear. Sure, a wardrobe assistant on a soap is a step down from her gig at the BBC, but all Tess wants is an easy life . . .

Unfortunately she’s barely arrived on set before she’s warding off the attentions of the show’s heartthrob, Sean Tyler – and, as a consequence, the hostility of its other star, Bree Brenner. And if the pressures and politics of working on a TV drama aren’t enough, she’s living with her high-maintenance mother, an ageing celebrity, and her infuriating sister Emma, an aspiring actress.

Still, Tess is certain she can deal with everything they throw at her – until Jake Freeman, her ex-fiancé, the man she last saw eight years ago as he walked away and broke her heart, is named the show’s new director…

The Wardrobe Girl is the perfect blend of romance and chick-lit. It’s escapism at its best. Thrown into the world of small screen TV drama and celebrity, we discover that the drama isn’t restricted to the screen–it’s what happens behind the screen that is even more interesting.

Tess is our likeable heroine. Escaping London off the back of a very public failed relationship, she’s keen to retreat to her homeland to lick her wounds and take stock. Working on the set of Pretty Beach as a costume designer she quickly realises that drama seems to follow her around. The show’s leading man, Sean, is paying her a little too much attention and his off screen girlfriend and show’s startlet, Bree, is none too pleased about it.

Then we’re introduced to Jake. He’s Pretty Beach’s new director and also happens to be Tess’s love that got away, the guy that walked out on her eight years ago when she chose her career over her man. And now Tess is realising she still has feelings for him…

Not to mention ‘Tonto’ (a.k.a. Simon) the good guy on set who would do anything for Tess.

Add in a celebrity actress mother and a sister with designs on becoming Pretty Beach’s next starlet, and Tess is beginning to wonder if returning to Sydney was such a good move.

Tess has all the qualities of a classic chick-lit heroine. Talented, funny and of course the uncanny ability to sabotage herself regularly. Far from being annoying, Tess’s antics somehow remain believable and amusing to read–partly because when compared with the rest of the cast on Pretty Beach, Tess seems positively normal!

Jake is the unobtainable ex. He’s understated gorgeousness against the backdrop of young male cockiness that the show’s stars parade blatantly. Towards Tess, Jake is hot then cold, caring, sometimes distant and Tess can’t be blamed for having a hard time spending time in his presence.

Pretty Beach is at times comical, so much so that if it were a film it would sit strongly in the romantic comedy genre. It’s not the sort of book you take seriously, although you will find yourself seriously enamoured with the book’s cast of characters and their stories. It’s a good fun read, where life mimics art. And it’s the perfect guilty pleasure to spoil yourself with when you’re in need of a weekend read.

Jennifer Smart has worked for many years in film and television, including five years on the Australian drama Home and Away as a Director’s Assistant and then scriptwriter. She lives in Sydney.

It's #coverreveal time for Book 3 in the Pierce Brothers series! One In A Billion is Seth's story, and it's a billionaire romance with a twist, because Seth is intensely uncomfortable with being a billionaire. God, I'm mean to my characters, aren't I? 😂 Pre-order link in profile and ARCs for reviewers coming early June. #upcomingrelease #piercebrothersromance #romcombooks #contemporaryromance #romcom #romancenovel #booksofinstagram #booksofinsta #authorsofinstagram #writersofinstagram #bookstagram #booklover #booksbooksbooks #bookworm #tbr #whattoread #booksofig #billionaireromance
Autumn break to our nation’s capital for a hit of culture and nature. I hiked to the top of Mount Stromlo while the boys mountain biked. Love autumn in #canberra 🍂 #mountstromlo #mountstromloobservatory #nationalgalleryofaustralia
Nice day for a walk. Finally! So nice to see the sun ☀️ #barrenjoeylighthouse #palmbeach #goodfriday #walking #familytime
Third place ain’t bad 😉🤩 Quite seriously, it’s an honour to receive this award from the Romance Writers of Australia in such a competitive category where I was up against the country’s best romance authors. To put it in perspective, Read Between The Lines is the 10th novel I’ve written and my 9th published novel. Writing is a tough gig on so many levels and success in its various forms doesn’t come easy. But I also feel incredibly fortunate to be able to do what I do. I’ve got two incredible men in my life to thank for that - my Leading Man & the Boy - for making my stories possible. Without them, I may have given up long ago! And no offence to the Alphas, but it’s also why I write about Good Guys 😉😍 #romancewriter #romancewritersofinstagram #writersofinstagram #bookawards #romancewritersofaustralia #authorsofinstagram #authorawards #contemporaryromanceauthor #contemporaryromancereads #contemporaryromance #booksofinstagram #bookstagram #romancenovel #romanticcomedybook
Don't forget my romantic suspense is on sale for just $1.99 this month! See what I did there? 😉😂 Buy link in bio. #romanticsuspense #romanticsuspensebook #romanticsuspensebooks #romanticsuspensenovel #contemporaryromance #romancenovel #booksofinstagram #booksofinsta #authorsofinstagram #writersofinstagram #bookstagram #booklover #booksbooksbooks #bookworm #whattoread #booksofig
I need to do more of this. It’s good for the soul. By this, I mean ditching work for the afternoon and spending it with my boys 😉#summerdays #summervibes #manlyharbour #manly
Happy New Year! My standalone romantic suspense set between the Hunter Valley vineyards and Sydney is on sale this month for just $1.99! Don't miss out (link in profile). #romanticsuspense #romanticsuspensebook #bookstagram #booksale #writersofinstagram #writersofig #booklover #booksbooksbooks #bookworm #tbr #whattoread #booksofig #authorsofinstagram
Happy New Year everyone 🥳 I’m certainly not sad to see the back of 2021, so it was nice of our local council to organise a fireworks display in our backyard to mark the occasion 😀🎆🤩 (It was actually just up the road at our local oval). #happynewyear #goodriddance2021 #fireworks #newyearseve
Better late than never. This batch should keep me going until the new year 😋😆 #christmasshortbread #shortbread #shortbreadcookies #glutenfree #dairyfree #nomnomnom